by Karen Cooper
University of Tasmania

Kiddies Corner is an installation parodying the children’s play areas that are found in such places as fast food restaurants, doctors’ and dentists’ reception areas and other practices where waiting is involved. These areas are usually defined by bold, vibrant colours and provide activities to keep children occupied, such as drawing materials, books and toys. 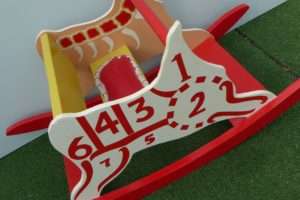 In my project I aim to reference these play areas by constructing an installation incorporating toys, books and wallpaper to create a ‘children’s zone’. I intend to lure the viewer into a place that initially reads as innocent and fun, but on closer inspection unveils dark, macabre imagery, with wallpaper depicting ‘meat trees’, creatures with meat toys and cattle prods, and toys based on cuts of meat. (Fig. 1, 2) 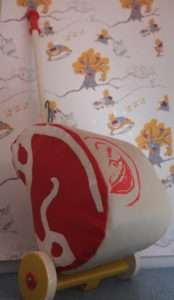 My intention is to satirise our distorted values concerning meat production; how we have become nonchalant and detached from our meat sources to the detriment of health, global ecology and animal welfare. I believe we are cosseted like children from the horrors of factory farming and slaughterhouses, with legislation in place ensuring that the public does not see the unnatural conditions and cruelty that occurs behind guarded walls.

Despite the ubiquity of meat, there is little or no reference to the animal in the marketing of animals products: fast food advertisements favour catchphrases such as ‘lovin’ it’, while meat in supermarkets is neatly sealed and sanitised so that the association with the animal is negligible. Carol Adams’ concept of the ‘absent referent’ is relevant here in that the meat eater is kept away from the notion of the animal by substituting the names of the animal and its body parts, e.g. pig becomes pork and parts become burgers (Adams, 1994). Protected from the realities of meat production children are often horrified when they learn where their meat comes from – something that children’s books and films rarely address. By incorporating meat imagery in a children’s play zone I use dark humour to prompt the viewer into considering the sources of their meat and their attitude towards animal welfare.

The project has taken many tangents from the first proposal. Initially I intended to construct a ‘publicity stand’ for animal celebrities, which would have included the disturbing wallpaper as a background. The celebrities were to be based on true stories of farmed animals who escaped the abattoir resulting in them making headline news and being given a name and sanctuary. I wanted to expose the double standards that apply where these individuals who are given names and spared from slaughter are the subject of overwhelming public sympathy, while there is near total disregard for the ‘unnamed’ billions who are slaughtered daily. I was working on the concept of an awards ceremony and celebrity magazine but I found that the project lacked punch and that I was attempting to include too much information.

In my research I looked at Matthew Herbert (1), a musician who recorded the life of a pig from birth to plate. The great irony was that for legal reasons he was prevented from recording the pig’s slaughter. Since the 1950’s when intensive farming began to replace traditional farming methods, animal production has increased dramatically but the transparency has lessened with new laws made to protect the meat industry from public view. Kiddies Corner intends to reflect our unquestioning attitudes, treating sentient animals as commodities and how we want our food cheap, nicely packaged with no reference to the animal or the life it has led.

My work is heavily influenced by publications, magazines and children’s books from the 1950s and ‘60s. This was the beginning of supermarket culture that promises anything we want, at any time, at low cost – something we are now so used to, like spoilt children, ignoring the detrimental consequences to the planet. I am drawn to the innocence that this era evokes but which has led to a blatant desire for convenience and consumerism. I am attracted by the bold technicolour print transforming everything into an illusory brightness.

Humour is a strategy that is important in my work as it provides accessible entry point to provoke critical thought about subjects that are disturbing. Artists that have successfully raised questions about factory farming in a way that is initially amusing and engaging are Nicolas Lampert and Banksy. Lampert uses collage in his Meatscape series to question our disassociation with food sources and lack of understanding of the impact on the environment.

The characters in his nostalgic landscapes appear to be ignorant of or blasé to the monumental piles of meat that replace landforms. Lampert’s Meatscape works thus speak of our ignorance and/or lack of concern about meat production. The graffiti artist Banksy used humour to address animal welfare issues in his work such as the robotic walking chicken nuggets and moving sausage-animals in The Village Pet Store and Charcoal Grill installation of 2008. 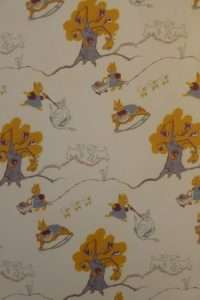 Sirens of the Lambs

Banksy used word play in the title and a sense of the absurd in the work, where he had a delivery truck full of soft farm animal toys accompanied by a soundtrack of distressed animals drive through the meatpacking district of Manhattan where trucks carrying livestock are commonplace but usually ignored.(Fig.6) 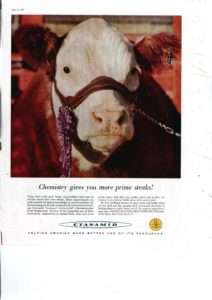 Working on Kiddies Corner has enabled me to work with the juxtaposition of meat images with the kind of innocuous imagery found in toys, books and decorative elements in children’s play areas. I have consciously employed a colour palette which reflects a ‘nostalgic’ feel (Fig.3). This reflects the irony in the fact that advertisements for meat were a lot more honest in the 1950s when they displayed a pride in unnatural conditions and chemical enhancement (Fig.4),whereas today information about factory farming is kept deliberately obscure (Fig.5). In our desire for cheap and convenient meat we have become content to ignore the abnormal lives endured by the animals who are farmed for food. The project has opened up other avenues to explore our double standards towards farmed animals and our nonchalance towards the environmental problems and health issues that are a consequence of meat eating. Having successfully completed this Honours project I look forward to returning to the ‘celebrities’ which I have referenced in the I Have Run Away soft book in ’Kiddies Corner’ with my intention being that this work will result in a publication that can be used to raise funds for animal sanctuaries. 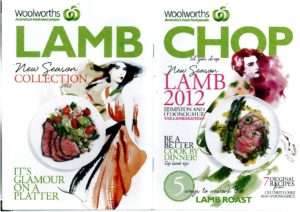 Singer, P and Mason, J. The Ethics of What we Eat. Melbourne: Text Publishing, 2006

Moussaieffe Masson, J. 2003. The Pig that Sang to the Moon: the emotional world of farm animals. New York: Ballantine Books.

Watt, Y. 2009. Animals, Art and Activism: An Investigation Into Art as a Tool for Engaging an Ethical Consideration of Human-Animal Relationships. PhD Fine Art, University of Tasmania, Australia.

Thanks to Dr. Yvette Watt and Anne McDonald for their patience and motivation, their good humoured, well informed support on this course has given me confidence, determination and an excitement for this and future projects, all invaluable.

Unless otherwise noted, all content on this website is copyright © 2021 The Animals and Society Institute. Please visit https://www.animalsandsociety.org/about-asi/website-reprint-and-use-policies to find out more about our reprint and use policies.