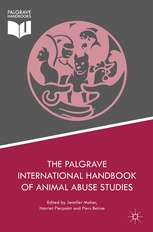 We are so excited to see the release of The Palgrave International Handbook of Animal Abuse Studies (2017), edited by Jennifer Maher, Harriet Pierpoint is and Piers Beirne.

This Handbook fills a large gap in current scholarly literature on animal abuse studies. It moves considerably beyond the debate that has traditionally dominated the discourse of animal abuse – the link between one-on-one interpersonal violence and animal abuse – and towards those institutionalised forms of animal abuse which are routine, everyday, socially acceptable and invisibilised. Chapters from expert contributors raise issues such as: the use of animals as edibles; vivisection; animal sexual assault; animals used in sport and hunting; animal trafficking; the use of animals by youth gangs, by other groups and in war; species extinction; and the passivity of national and international organisations in combating animal abuse. The Handbook is a unique text: it is essential reading for students, researchers, academics, activists and policy makers involved in understanding and preventing animal abuse.

“This important collection of essays reminds us that relations between human and non-human animals are full of contradictions. For example, how can it be that these relationships can be characterised by celebration and affection, cruelty and atrocity? How do we reconcile declarations of compassion and care in medicine and farming with some of the practices of laboratories and intensive rearing regimes? This is the authoritative and comprehensive handbook on these questions and more.” (Nigel South, Department of Sociology, University of Essex, UK)

“This terrific new collection, edited by Jennifer Maher, Harriet Pierpoint and Piers Beirne, is the most comprehensive book on animal abuse yet released. Not only does it exhaustively cover the areas of animal abuse many of us are familiar with, including up-to-date information on interventions, but it covers topics like neglect, hoarding, and sexual assault as well. The editors should be commended for going beyond these subjects, and including multiple chapters on institutionalized forms of animal abuse such as the treatment of animals in factory farms or biomedical labs, and other social sanctioned practices such as hunting, the use of animals for entertainment, and the breeding, sale and use of “status dogs”. The Palgrave International Handbook of Animal Abuse Studies will be equally valuable to the university professor or student, and practitioners in fields as diverse as law enforcement or social work–as well as anyone who abhors animal suffering.” (Margo DeMello, Human-Animal Studies Program Director, Animals & Society Institute, USA)