An Interview with the Author: ‘Absent Interests: On the Abstraction of Human and Animal Milks’ 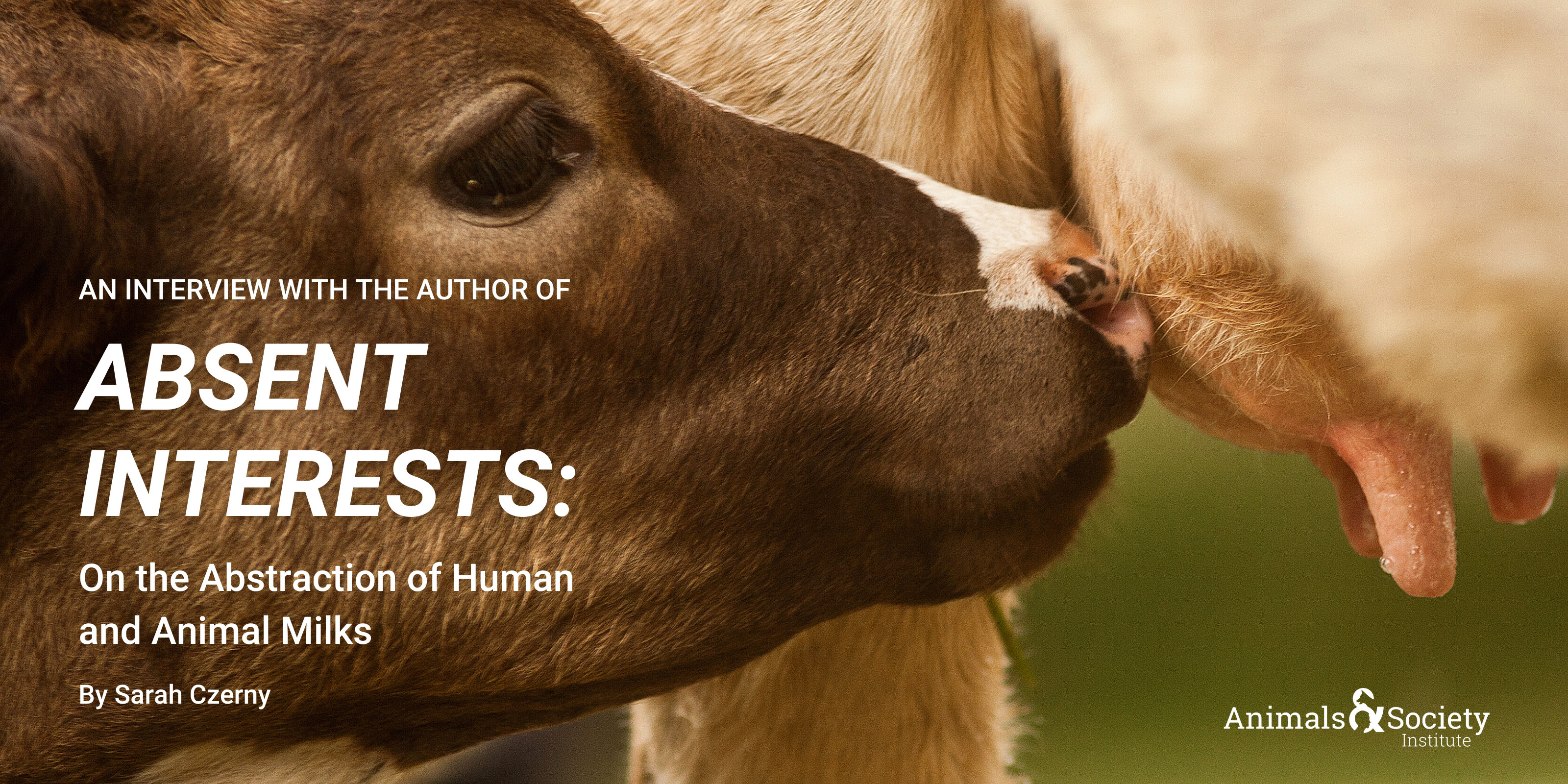 We are excited to share the latest release in the ASI-managed Brill Human-Animal Studies Book Series, Absent Interests: On the Abstraction of Human and Animal Milks, by Sarah Czerny.

By asking the question of, “How does milk become cow milk, donkey milk, or human milk?” Czerny takes readers through an ethnographic comparison of milk consumption and production in Croatia in a range of different social settings: on farms, in mother-infant breastfeeding relations, in food hygiene documentation, and in the local landscape. Absent Interests argues that humans actually invest considerable work into abstracting and negotiating milks into their human and animal forms.

ASI’s HAS Program Director, Gala Argent, sat down with the Absent Interests author to explore the species difference between milks, and how this difference might not be as stable as one might initially assume.

GA: Why did you want to publish this book?

SC: The idea for this book initially came when I was breastfeeding my son. At the time a lot of people I knew told me that they had really struggled with breastfeeding and found it difficult. Quite a few said they had been surprised by this, saying that they had expected it to be easy because it was something “natural”. What struck me was that they often seemed to equate their ability to breastfeed with their ability as mothers, saying that they had been worried they were bad mothers because they had not liked, or had found it difficult to breastfeed. Since I already had an interest in human/animal relations, it made me think about the “naturalness” of milk, and how it took its human and animal forms.

GA: How does the book relate to your background and general areas of interest?

SC: Before I started the research for this book, my general area of interest was in human/animal relations, but specifically on human/microbial relations. This interest started quite some time before COVID-19, but the pandemic has sadly shown how important it is for us to think about the “invisibles”. Whilst microbes are not a central focus of interest in this book, they are in it. Food safety regulations have an important place in animal milk production, and in Croatia, joining the European Union and the ensuing change in regulations has influenced the way animal milk is farmed.

GA: Place your work in the context of literature in the field of Human-Animal Studies. How is it addressing and advancing current debates/issues/problematics in the field?

SC: I think my work fits into several areas. The first concerns interests in the concepts of ‘detachment’, and ‘disconnection’ in human-animal relations. Here I am thinking of the earlier work of Matei Candea on Meerkats, as well as his edited collection on detachment as a more general concept, where there was a chapter by Kim Crowder on detachment in human-pig relations in intensive pig farming. We sometimes treat detachment as being something negative, where we focus on the connections between humans and animals, where we talk about “becoming withs” or “entanglements”. But actually it can be something positive, and as Marilyn Strathern has pointed out so many times, it is critical in how we shape our social relations.

Another area, which I hope this book will contribute to, concerns discussions about some of our own approaches to the study of human-animal relations, and here I mean the point that Rhoda Wilkie made about partisan approaches in scholarly writing on farming. I struggled with this when writing this book and doing the research for it, since it was very tempting to slip into making a normative judgement about the different forms to the milk relations I was observing. But Wilkies’ words really made me pause for thought. If we focus only on the treatment of animals on dairy farms, this detracts from the point that there is still a huge consumer interest in milk. It suggests we need to take a step away from the farms and explore the wider social context.

GA: What are some of your major messages?

SC: The main point I make in this book is that when we are thinking of “milk relations”, often we focus on only a few specific relations. I suggest we need to think more broadly about this. In human milk production, the mother-infant relation is treated as the central relation, but when you look closely this relation is shaped by many other people and sources: for instance, well-meaning relatives, weaning guidelines, or advice from health-care professionals. One consequence of this is that it places a huge pressure on the human mothers. When I was interviewing women about their breastfeeding experiences, some said that they had breastfed years and years ago, but it was only in our interviews that they had told anyone how about they had really felt about it. They were so worried someone would judge them as being a bad mother, it really is difficult to overstate that sense of pressure they felt.

Similarly, in animal milk production, often the focus is on the farmer-animal relation. It sets up a scenario where farmers are seen as the problem, in terms of animal welfare. But other relations and interests are really important to think about when we are thinking about possible positive changes. Since milk is so embedded in the social landscape, at least in the way it is here in Croatia, when thinking about change we need to think how it fits into this context.

GA: Who is your intended audience?

SC: I am an anthropologist, so this book is written from an anthropological perspective, using anthropological theory. But it is not just for an anthropological audience. Since it compares human and animal milks, it will be hopefully of interest to both people with an interest in human breastfeeding or chestfeeding, as well as people who are interested in human/animal relations. I hope that this comparison will challenge certain areas that we sometimes take as givens or even “natural”.

GA: What are the goals of your research in terms of improving the welfare or understanding of dairy animals? What policy implications does the work provide regarding the advancement of human-animal relationships.

SC: My main goal is to show how milk is very much a product that takes it shape in social relations. It raises the question of why some milks are more accepted for human consumption than others, and why milks are so often presented as coming from animals.  On a more practical level, and in terms of what implications this research has on policy, this has something to say about the place of other milks in a legislative sense, particularly plant milks. In the European Union, milk can only be sold as “milk” if it has come from a mammary gland of an animal, and on the basis of the research for this book, I think that there is much that can be questioned about these strict legislative definitions. If there is no coherent form to milk, then why does “milk” have to only come from an animal? I mention at the end of the book that projects such as Miyoko Schinner’s work in helping farmers shift from dairy to plant-based farming are very inspiring. Such shifts, I think, need to be accompanied by a legislative shift in how we define milk.

For more information and to purchase your copy of Absent Interests, click here.