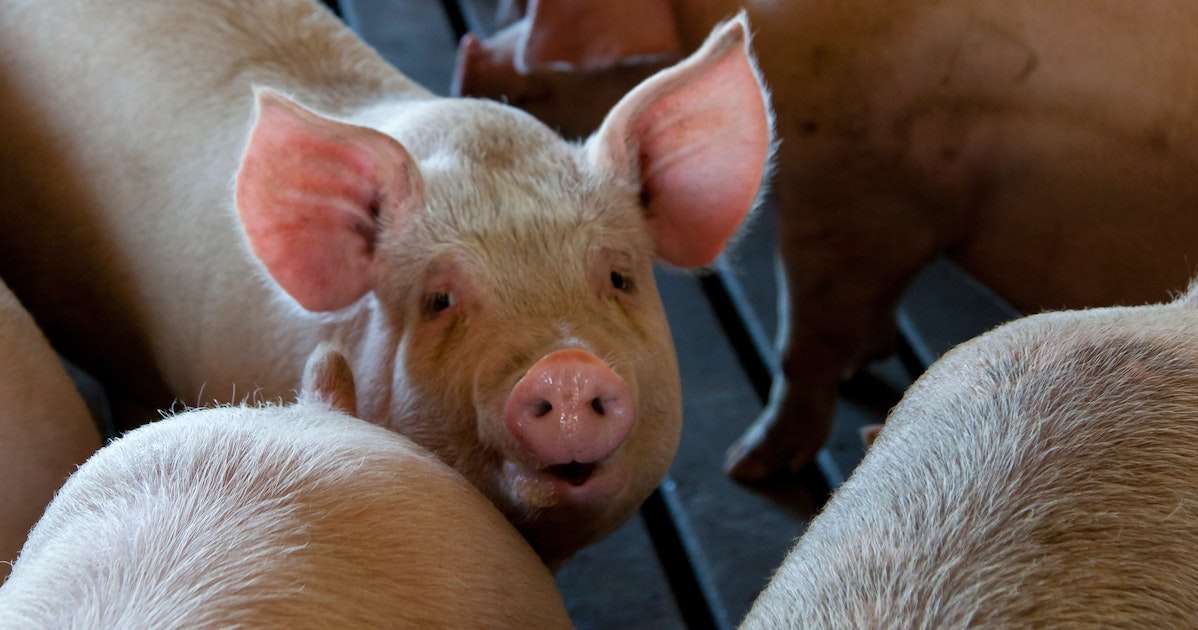 We’ve all seen them, the photos of the killing floors. Some of us may avoid looking, fearing the nightmares they induce. Others steel themselves to bear witness to the trauma and deaths. Still others immerse themselves behind the scenes in the brutal worlds of knives and stun guns that bring death to billions of farmed animals each year. They do so in order to bring images of these acts of violence to others in the hope of advancing change. Amy Jones and Paul Healey are two such documentary photographers, videographers, and activists who, in their ongoing project, Moving Animals, focus on the gruesome nature of the industrialized animal agriculture industry. (See also Jo-Anne McArthur’s We Animals.)

As Jones discusses about her photo essay, “Next in Line: The Emotional Trauma We Inflict on Farmed Animals,” “Research shows that farmed animals are sentient and emotionally complex individuals: cows are able to “catch” each other’s feelings of stress, sheep can recognize fear in other sheep, chickens worry about the future, and pigs can take the perspective and feel the emotional state of another.”

While these characteristics of nonhuman animals might come as no surprise to those concerned with the abuses within industrialized agriculture, the industry itself does its best to dispute such research. Last year, for instance, cognitive ethologist Marc Bekoff in his blog, Ontario Farm Organization Claims Animals Don’t Think or Feel, cited the Ontario Federation of Agriculture’s contribution to a report in support of an ag-gag bill as professing “We simply do not know if animals are capable of reasoning and cognitive thought.” He countered, “The Ontario Federation of Agriculture claims we don’t know if nonhumans think, so therefore they don’t. Both [ideas] are anti-science, defy reality, and are inane…. Their misguided views support and will continue to perpetuate the extremely cruel and brutal treatment of ‘food animals’ and ignore a wealth of scientific data.”

In addition to the inhumane conditions under which animals become meat through factory farming, the connections between factory farming processes, zoonotic disease emergence and spread, and pandemics are clear. The crisis unleashed by the COVID-19 virus both exacerbated and illuminated animal abuses within industrialized animal agriculture. As a direct result of pandemic-caused factors—slaughterhouse closures, disrupted trade, and supply chain problems—untold millions of chickens, cattle and pigs were killed. Further millions of fur-farmed animals suffered similar fates. Industrial farming’s model of intense human and animal density in restricted spaces stresses the biological and mental health for members of both species. This creates a problem that ties the industry’s inhumane treatment of animals with social justice concerns for the humans involved, where economic instability and lack of insurance force workers into unsafe conditions.

On the positive side, press coverage spotlighting these issues placed the industry under scrutiny. Indeed, a November 2020 survey by the ASPCA found the COVID-19 crisis drove United States residents’ desire to reform animal agriculture. The survey found 89% of participants were concerned about industrial animal agriculture, citing animal welfare, worker safety, or public health risks as a concern. Moreover, 85% of farmers and their families support a complete ban on new industrial animal agriculture facilities—almost twice the level of support expressed by the general public.

From another angle, the nexus is clear between animal welfare within industrialized framing settings and climate change. Intensive animal food production contributes an estimated 15% of human-generated greenhouse gas emissions to the climate crisis. This, by one account, is more greenhouse gas than is produced by the petroleum burned to power all the world’s planes, cars, ships, trains, and trucks. The methane produced, supply chain transportation, and deforestation all contribute to the industry’s climate change impacts. On this, too, the industry is fighting back. “The largest meat and dairy companies in the U.S. have spent a considerable amount of time, money, and effort into downplaying the link between animal agriculture and climate change, and into fighting climate policy more generally” says researcher Oliver Lazarus who with his co-authors Sonali McDermid and Jennifer Jacquet examined the world’s 35 largest meat and dairy companies’ climate reporting and policies. “U.S. beef and dairy companies appear to act collectively in ways similar to the fossil fuel industry, which built an extensive climate change countermovement,” the authors conclude. “Meat- and dairy-related trade associations have more traditionally been used to lobby for access to grazing lands, fees and manure management regulations, and to influence government regulation, but more recently they have been involved in blocking climate policy that would limit production.” This means that animal agriculture companies contribute to both the physical impacts and public opinion of climate change. (Original article here.)

“We are in a complex crisis with current food production,” says Lars Angenent, an environ­mental scientist at the University of Tubingen. “The meat is cheap, but at the cost of many other things that are not sustainable.” Two of those factors are water and productive soil, both negatively impacted by intensive farming. Without changes that include shrinking industrialized agriculture’s footprint, argues Tom Philpott, agricultural correspondent for Mother Jones, the US agricultural system is on the road to collapse.

The bottom line is that in addition to the abuse of the billions of animals slaughtered annually, the meat industry negatively impacts human health and the environment in ways that are significant, worsening, and place the sustainability of life on the planet at risk. The solutions are simple enough to understand, if difficult to implement. From the public health side, warnings abound that if we want to avoid the next pandemic, we need to stop factory farming. Climate scientists tell us this is a “make or break” point in time, and that the same call to change our agricultural practices applies to the climate crisis.

If indeed what is past is prologue, the stage is set; without significant change we have seen the future in this past horrific year. Yet the apparently effective ongoing lobbying by agricultural industry groups and subsequent inaction by governments continue to thwart productive movement forward.

This has prompted non-profits such as UK-based Sustainable Food Knighton, to crowdfund judicial reviews of farming practices, and one UK-based NGO, Humane Being, to launch a Scrap Factory Farming campaign. As of April 27, Humane Being had already crowdfunded almost £25,000 out of a target of £60,000 to fund possible legal proceedings against the UK Department for the Environment, Food and Rural Affairs to ensure the government addresses issues involving factory farming’s impacts on the climate crisis and future pandemics. Human rights lawyer Michael Mansfield is spearheading this campaign to ban factory farming in the UK to better protect people, the planet and animals.

The callousness and violence of industrialized agriculture’s treatment of animals alone mandates we reconsider our relationship to them. For the sake of the planet that supports our own and other species, such an examination also includes the need to stave off new zoonotic disease pandemics and tackle the climate crisis. Envisioning and enacting interspecies futures that include saving humans and other animals both from the destruction of habitats and ecosystems and from the traumatic and deadly consequences of the killing floor provides a way forward—if we have the will to make it happen.

Welcome to the Anthropocene, an interdisciplinary lecture series organized by the Oslo School of Environmental Humanities.

Anti-Pandemic Diet informs the public about the connection between the ongoing COVID-19 pandemic and our dietary behavior.

animalsclimatehealth.com: recorded webinars on animals, people and the planet.

The Last Pig: A Farmer’s Ethical Crisis chronicles one farmer’s final year on the farm as he questions his beliefs and the value of life.