The Animals & Society Institute (ASI) offers the Human-Animal Studies International Development Project (HASIDP) each year. The purpose of this competitive, annual program is to provide one non-American university per year the resources to build its own human-animal studies program. Human-Animal Studies (HAS) programs have proliferated at universities in some countries.  Still, a great many universities have faculty and students who are interested in developing such programs, but lack the resources to create them on their own. This program fills that gap by providing the financial and knowledge-based resources that such scholars, students, and universities need to build their own HAS programs. Preference for this award is given to universities located in countries that lack a significant presence of HAS programs, or that do not have the funds to build their programs. In addition, preference is given to universities that do not already have a robust presence of HAS programs (e.g., a minor or major), but that have the promise of such (e.g., one or two active HAS scholars). The selected university receives financial and consultative support leading to the creation of an HAS program, including the creation of courses, marketing support, cultivation of institutional and extra-institutional partners, and administrative support. The amount of the award ranges from $10-$15,000, depending on the budget submitted by the applicant. (The institution may need to cover additional, non-budgeted expenses during or after the program on its own.) As part of the award, a visiting senior HAS Fellow may visit the university for up to one week in the year after the award is given, to provide logistical and pedagogical support (these costs will not be taken from or included in the financial award).

Our previous winners have included:

The University of Milan, Milan, Italy 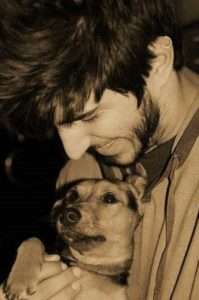 Bertolesi Lorenzo, the first student to complete his Masters work in Milan’s new HAS program

The award allowed for the creation of a masters program in HAS at the University of Milan. In 2016, the university awarded its first MA to Bertolesi Lorenzo. 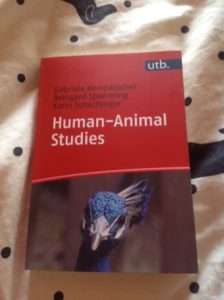 Human-Animal Studies, the first German-language textbook in the field, by Gabriela Kompatscher, Reingard Spannring, and Karin Schachinger, all of the University of Innsbruck

The University of Athens, Athens, Greece

The award will fund the creation of a graduate HAS program at the University of Athens. In the words of Dr. Evangelos D. Protopapadakis in the Department of Philosophy, “Our ambition is not just to establish one more postgraduate program, but also to turn the tables in Greek society with regard to awareness and concern for animals.” Unfortunately, the process for this program is taking longer than expected in terms of bureaucracy but we will update everyone as it moves forward! 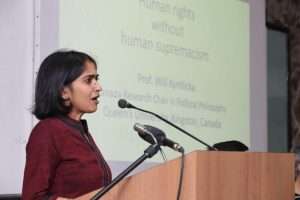 The award has lead to the creation of an HAS program at the Tata Institute of Social Sciences, including a credited course for Master’s students, a fieldwork placement with the Federation of Indian Animal Protection Organisations, a seminar series, and an end-of-year workshop that brings together students, scholars and practitioners from across India. The course titled ‘Animal ethics and social justice’ took place during the first three weeks of January and was taught by Krithika Srinivasan, Emily Brady, Katie Gillespie, Will Kymlicka and Shanker Raman. Dr. Srinivasan said, “By drawing on this pool of scholars, we hope enhance the legitimacy of human-animal studies as a field of scholarship and related practice in the university and India more broadly.” The TISS Human-Animal Studies initiative was developed and carried out in collaboration with TISS Social Work alumnus and HAS scholar, Dr. Krithika Srinivasan, who is based at the Institute of Geography, University of Edinburgh.

This award will be used to develop a post-graduate module in Human-Animal Studies that straddles sociology, anthropology, history, psychology, criminology, Public Health, social geography, environmental studies and possibly other life sciences. Students in turn, will be exposed to a cross section of academics, expert scholars, writers, film-makers, environmental activists, veterinarians and animal welfare professionals. Experts will be consulted and invited to give guest lecturer and host seminars. Students will also be taken on field trips and will attend workshops with animal welfare and Humane Education professionals and activists. A field trip to Greyton Farm Animal Sanctuary, movie screenings, as well as a round table discussion, will form part of this program. Students will be required to read and prepare in advance for seminars which are participatory and interactive. They will also be required to present their research proposals and projects to their peers and invited guests. It is further anticipated that several research projects, dissertations and publications will emanate from this program.

From the project proposal:

The HAS hub @ICS-ULisboa aims to create and foster HAS in Portugal. Using the hub concept, this proposal intends to boost social innovation, to build a collaborative community on HAS with shared goals, to attract diverse members with heterogenous knowledge, and to facilitate creativity and collaboration in physical and digital space. The implementation of a HAS hub @ICS-ULisboa would be favored not only by the growing critical mass that has been increasingly gathering around the topic, but also by the thriving academic environment of the University of Lisbon to which the Institute belongs. This will give the hub a strategic positioning not only at a national level, but also at an international one. ICS-ULisboa is an institute of the University of Lisbon, which is the largest and most prestigious university in Portugal and one of Europe’s leading universities. Having almost 50.000 students, the University of Lisbon brings together various areas of knowledge and has a privileged position for facilitating the contemporary evolution of science, technology, arts and humanities. Accepting the responsibility of making the city of Lisbon one of the great European capitals of culture and science, the University of Lisbon welcomes about 6.900 international students each year, about 14.5% of the total number of students coming from more than 100 countries, who seek a high quality education, as well as the culture, climate and hospitality that Lisbon and Portugal have to offer.

This year’s award will help fund:

The International Development Project is directed by Kenneth J. Shapiro and Ivy Collier of the Animals & Society Institute. We are grateful for the previous support and partnership of the Humane Society International, and for the support of The DJ&T Foundation. Please address all correspondence to us at: ivy.collier@animalsandsociety.org